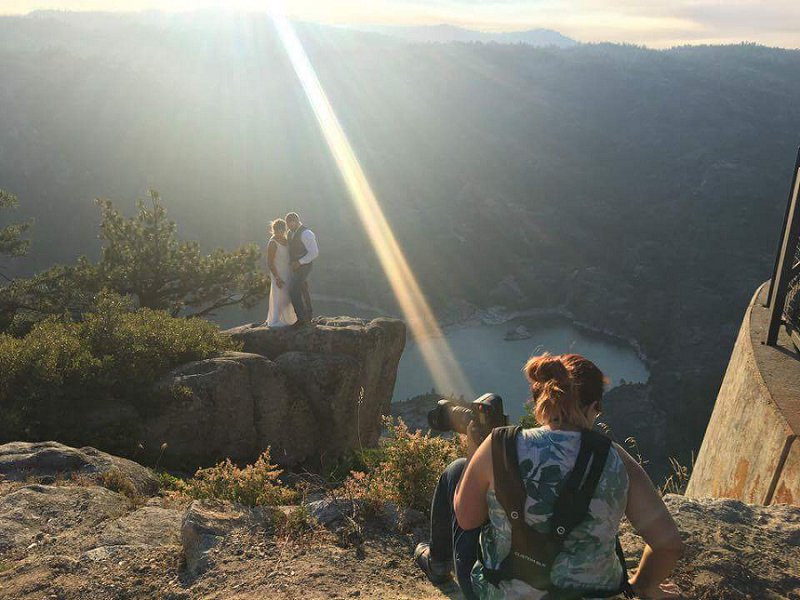 My assistant never swears. Like EVER. Unless she sees a bear.

Sharice and Kyle were planning to elope in Yosemite National Park, but the Detwiler fire changed our plans. I’ll be blogging their GORGEOUS elopement at Donnell Vista tomorrow night. In the meantime, I have to tell you how we narrowly escaped our deaths.

It’s a long and winding road down that hill in the dark. We did our usual Car Karaoke, singing Katy Perry’s “Swish Swish” over and over again, and complained about how hungry we were. As we reached MiWuk Village, I said, “This is where we start to see civilization again,” and laughed. About three minutes later, Desi points to the left and shouts, “THAT WAS A FREAKING BEAR!” Except she didn’t say “freaking.” This is a family show, so…

“It ran into the woods!”

I drove on, defeated. Then a dog darted in front of my car and I hit it. And then I just kept driving, as I looked for it in the rear-view-mirror, but I never saw it in the road. I think it bounced off my car and ran off. I don’t know what scared it, but it could’ve been that bear. Also I grew up in those mountains, and I’ve heard horror stories about people stopping at night in scary situations, and I’ve even been followed before, so I never ever stop and get out of my car at night. I was way too freaked out about being out there in the dark.

Desi shouted, “THAT WAS A BEAR!”

Because … everything is a bear now.

“It was not! It was a black dog with white on its face.”

I swear there was a man behind that dog. I thought he was trying to grab it and it was running from him. Or did he scare it into the road on purpose?…..

I started having Criminal Minds flashbacks.

No. There was no way I was getting out of my car. I know I’m super paranoid, but a lot of really strange things have happened up there. My dad and my grandmother always told me, never get out of the car. Then today, while writing this blog, I found this article: So, people have legit disappeared from that area.

I could see the headline in the Union Democrat:

Photographer and Assistant Murdered by Serial Killer, but Don’t Worry, the Dog is OK!

Plus, bears. There was a freaking bear in those woods, and Desi had just seen it 5 minutes before!

Plus, I grew up in those mountains. I learned to drive up there. I’ve hit hundreds of animals–squirrels, mice, raccoons, possums, cats, dogs, deer, quail, cute little bunnies, etc. I’ve run over like 100 snakes. After about ten years, it stopped affecting me. Yes, that’s really sad. I’ve had animals hit by cars, and the people didn’t stop, and I didn’t expect them to.

When we reached Sonora, we went through McDonald’s, and I swear, if you judge me, I’ll scratch your eyes out. YOU hike for three hours while shooting and see what you’re willing to eat. Besides, it was delicious.

We survived the day and made some amazing photos. I’ll be getting the film back tomorrow, so if you want to see the final results, sign up for my newsletter!